To understand Experimental Photography, we need to look at its history, and analyse its evolution.

Photography is a journey of self-discovery that I carry out through the trial and error process of experimentation. When I make photographs, I am exploring on several levels, inspired initially by the subject matter and the experience of taking the shot, then thinking of different ways to chose techniques and manipulate the image during printing. I don't have an academic background in photography, but I am always learning. In my search for new methods to create abstraction in my photographs, I came to Experimental Photography and have used it initially in my series Illusion, then in Crossing Boundaries, and most recently my works made over the last year in the exhibition Saving Face.

I am excited to know that there is much more I can do, but for now, the methods I have experienced with are film-soup, slow-shutter, multiple exposures and a hybrid approach to these techniques. 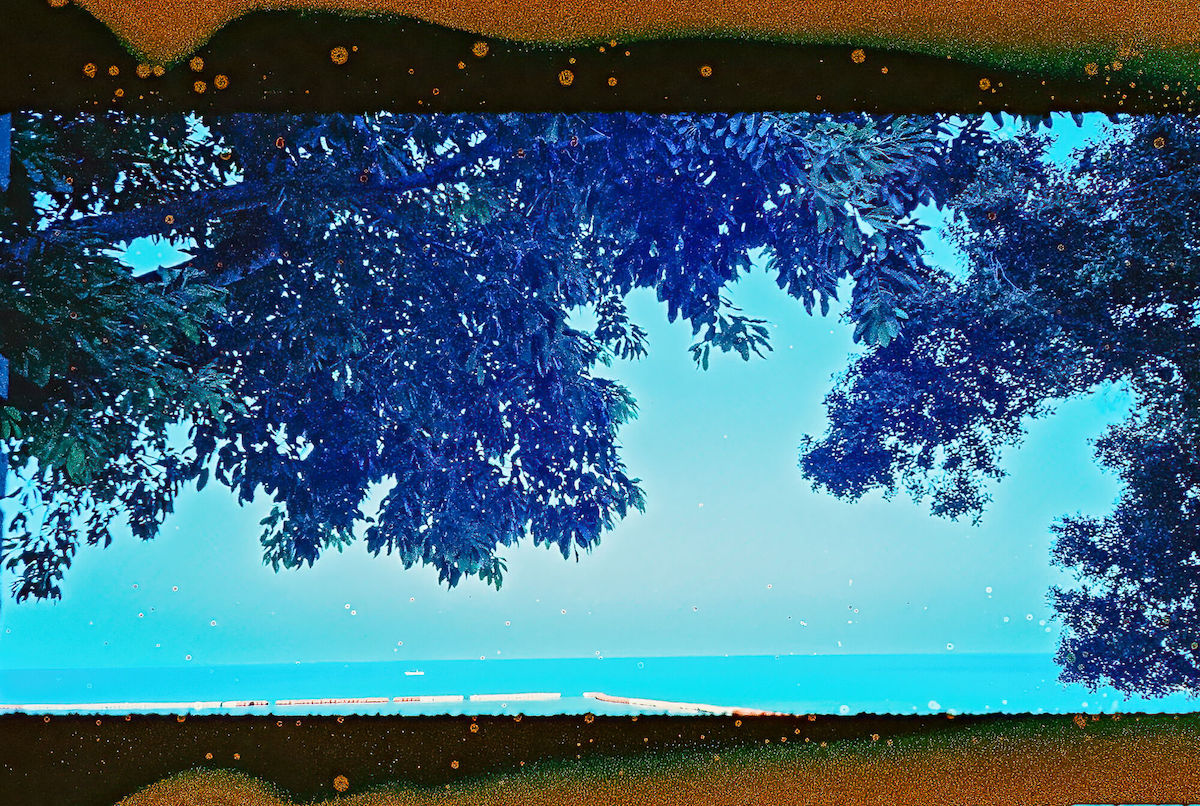 The History of Experimental Photography

To understand this way of working, it's important to look at the history of Experimental Photography. It is defined by non-traditional and this crosses over all forms of digital and film photography. It's very liberating to use Experimental Photography approaches because it helps you to learn more about the mode you are using, the technology and the bounds of those facilities. Often contemporary photographers are also experimenting with a digital analogue mix in their work too. Ultimately, it's a realm where there can be no wrong approach, whether that be within exposure times, digital editing, altering darkroom processes, switching camera settings or layering images.

As a genre, Experimental Photography started to be recognised in connection with the art movement Dada. This movement was one that very much grew out of the pain and injustice of World War I, seeking a way to find alternative approaches to society, to put art before violence. The artists, initially a group based in Zurich in Switzerland, were questioning the art establishment as well as societal structures, through dismantling aesthetic norms. They used elements of satire and nonsensical imagery, often bringing together contrasting elements, and directly influenced the birth of Surrealism.

In terms of photography in particular, perhaps because of its mechanical and technical processes that could be seen as well-disciplined, the artistic choices made by Dada and Surrealist photographers can be highly surprising, powerful or poetic.

Enhancement and stylisation were not, of course, a new feature of art at this stage, however, and experimental techniques have always been used within photography. In a way, this is how photography has been developed and refined. Certainly, early and analogue photography has had a direct influence on the types of filters and effects present within digital image manipulation software such as to emulate lens flare, over exposure, tints and sepia.

In the 1800s, photographers started to adapt their images for both artistic and commercial reasons. During the 1840s, Calvert Richard Jones altered the composition of a figure study featuring a group of Capuchin friars that he took in Malta. He thought that the fifth monk, set slightly to the back of the main group, was destabilising the composition and so painted them out of the negative. When the print was made, the painted out shaped becomes part of the background sky.

When Abraham Lincoln was assassinated in 1865, there was a dearth of contemporary photographs. Thomas Hicks created one to meet the demand by adding Lincoln's head to a photograph of another politician called John C. Calhoun who had been photographed in a suitably stately pose. These practical uses of Experimental Photography continued in the early 1900s when studios offered services to collage in images of family members who couldn't be there in person for group studio portraits.

You can read more about some iconic examples of image manipulation through the ages on this article by famouspicture.org 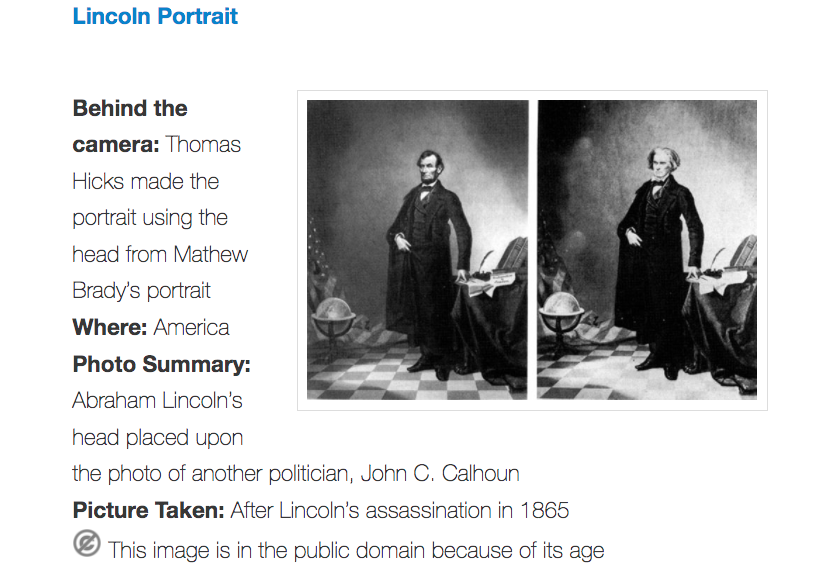 Screengrab of the Lincoln section of famouspictures.org article about image manipulation where they compare high profile published images with the original

Photographers have also used experimental techniques to create fake documentation of fantastical events, such as the spirit photography practiced by William H. Mumler and others involved in the Spiritualist Movement in the late 19th century and the creation of a world of fairies in Cottingley in the UK in 2017.

You can see examples of spirit photography held with the Elliott Coues Collection on their website.

Here's a great article in The Telegraph about the Cottingley Fairy Photographs in that were made by two children in the back garden of one of their homes. 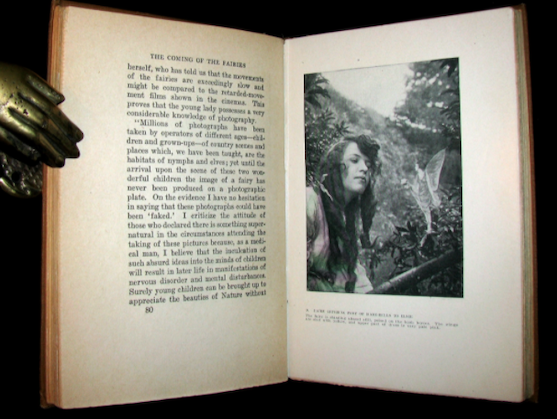 Image: Page spread of a book by Sir Arthur Conan Doyle that discussed the photographs by Elsie Wright and Frances Griffiths. This was featured on mflibra.com and gives a good profile of the exquisite book, although this version has been sold.

This exploration continues today, with many contemporary photographers experimenting with the boundaries of photography and finding new ways to make their work. 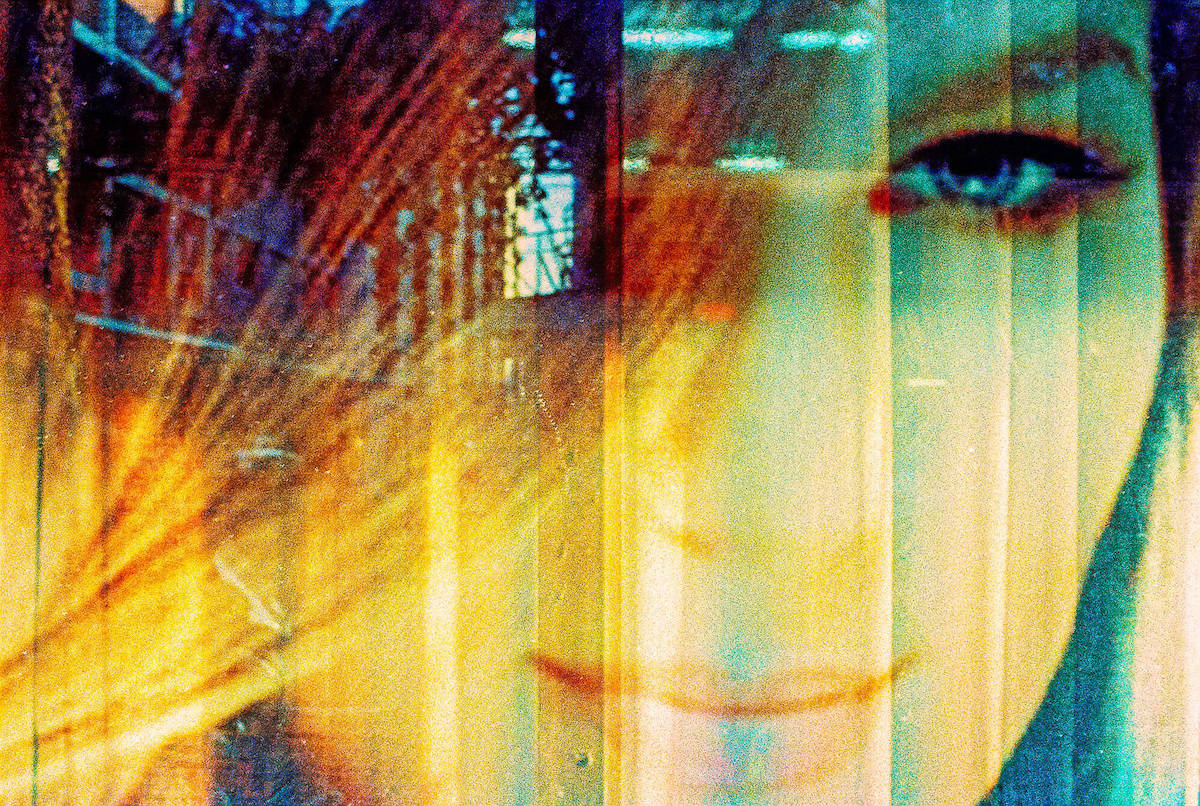 David Emmit Adams uses experimental approaches throughout his process including how the work is displayed, something that I am personally very interested in. He manages to keep a conceptual integrity throughout his projects, such as POWER, in which he creates photographs of oil refineries directly onto the lids of oil drums and presents them accordingly within the gallery. 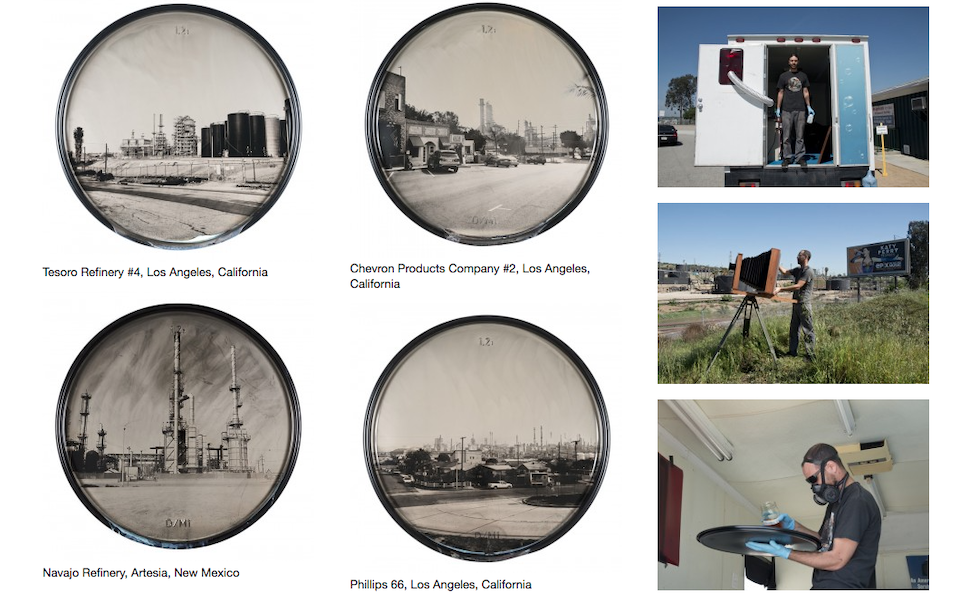 Image: David Emmit Adams, images displayed on his website which show elements of the production and final work for POWER, 2017.

In a completely different way, Mercedes Jelinek takes photography into a form of collage, using meaningful paper materials as the substrate for the photographic images. In this series called Give Her Space she has created large-scale portraits of women that merge with evidence of the writing that is often perceived as the pursuit of men only. 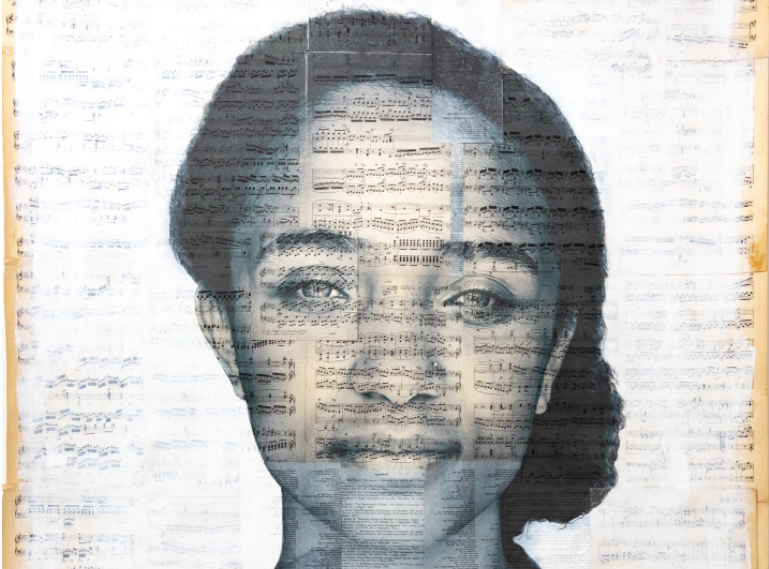 Francis Baker's recent work is incredibly compelling as an environmental project, Most Important Species, where he has taken a starting point of thinking about the interconnectedness of species on earth. The resulting images are produced through camera-less analogue photography. He lays the subject matter directly onto the vintage black and white photographic paper, exposing it to the sun, to create Lumen Prints and catalyse colours from the sheets, which would normally have been used for monochrome works. The resulting images give graphic, luminous or ghostly images of seed heads, bees and leaves, at once showing the fragility and the radiant power of the natural world. He also added further meaning by re-envisioning single-use plastic bottles as flowers, using them to make the blooms in one composition. 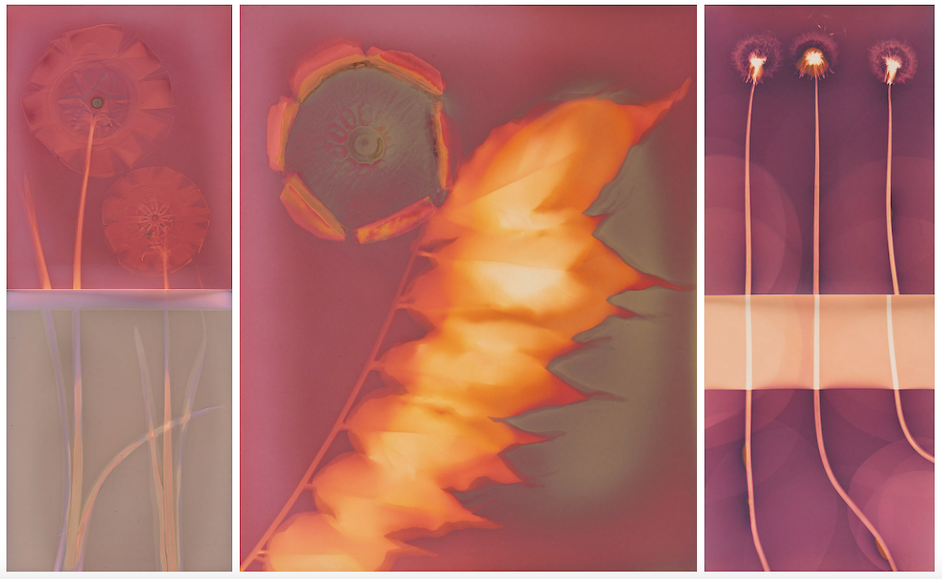 Image: Francis Baker, image of several works from his series Most Important Species and Walking in the Anthropocene, 2021, shown on his website.

Ultimately, Experimental Photography is a way to up your skills, think differently about photography and have fun. If you are interested to know more check out my other article that goes into more detail about how to get started with a series of experimental techniques.

Unlock Your Imagination with BRYCE Watanasoponwong

Explore the unique world of BRYCE Art. Experience the limitlessness of artistic expression with experimental photography-based art and storytelling.